In honor of the upcoming olympics, I figured I’d write a post highlighting something that JK, Bert, and I came up with in the process of writing our book on heavy tails.

One of the topics that is interwoven throughout the book is a connection between “extremal processes” and heavy-tails. In case you’re not familiar with extremal processes, the idea is that the process evolves as the max/min of a sequence of random variables. So, for example,

Of course, the canonical example of such processes is the evolution of world records. So, it felt like a good time to post about them here…

What’s the connection between heavy tails and world records?

The New York Times has a great visualization of world records that helps to make this clear… You should click on over to it to play around, but the following screenshot highlights the point I want to make. It shows the progression of track running world records.  (On a related note, I’m very curious to see the results of the LetsRun.com clean/dirty poll for world records.)  In any case, though, in the plot below shows the pace (sec/100m) that each record decreases for all running track events (each line corresponds to a different event, in order of distance except for the 100/200, which are on top of each other). 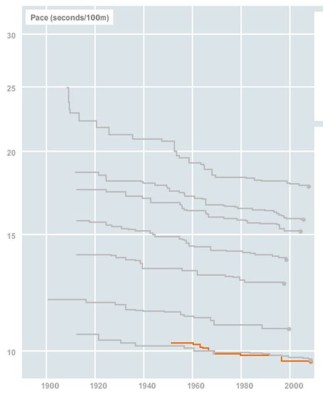 When you look at this, you can’t help but notice that the times between improvements look sort of heavy-tailed. Basically, there are lots of periods where the record changes frequently, but there are also others where the records are unchanged for long times.

In fact, this has been observed and tested empirically in a large number of contexts; for example, records for rainfall, earthquakes, and other extreme events.  You can find lots of papers in the literature identifying such things… Very commonly, the times between “records” are, in some sense, heavy-tailed.

To formalize the setting, let’s consider the following. Suppose we observe a sequence

of i.i.d. random variables, with distribution

denote the instant of the

denote the time between the

st record and the

Then, we can prove the following theorem, which I think is new…

is continuous. For any

Note that this is a somewhat delicate situation that we’re trying to study, because

is not stationary with respect to

Indeed, you should expect that as the record gets bigger, the time it takes to break it gets larger.

Also, a fun observation about the theorem is that it isn’t even required that

have infinite support for

to be heavy-tailed! …so looking at records can create heavy tails from things that are extremely light-tailed.

I think the proof is kind of interesting, so I figure it’s nice to include the idea of it here…let me know if you can find a simpler argument!

is insensitive to the random variables we’re considering, i.e., to

> In particular, the following shows that we may assume that

is exponentially distributed with no loss of generality, which makes things a lot easier!

To see this, define the function

is simply the cumulative hazard function corresponding to the distribution

is exponentially distributed with mean 1. This actually follows easily from the (standard) fact that

is a uniform random variable over

is an i.i.d. sequence of exponential random variables. Moreover, since

is non-decreasing, records of the sequence

coincide with those of the sequence

Thus, for the purpose of studying the time between records, we may assume without loss of generality that

is an exponential distribution with mean 1.

Now, using the above, we can study the distribution of the records in a much simpler setting. What we’ll show is that the

has an Erlang distribution with shape parameter

is distributed as the sum of

i.i.d. exponential random variables, each having mean 1). To do this, we’ll proceed inductively. Clearly, the above claim is true for

Assume that the claim is true for some

is exponentially distributed with mean 1, and independent of

From the memoryless property of the exponential distribution, it now follows that

in distribution. This proves our claim that

has an Erlang distribution.

We are now ready to analyze the tail of

Once again, we proceed inductively, and first consider the case

Note that conditioned on the value of

is a geometrically distributed with

Therefore, unconditioning with respect to

It therefore follows that

Next, we assume that for some

and analyze the tail of

is exponentially distributed with mean 1, and independent of

Therefore, we can think of

as the time until a new sample exceeds

Note that the time until a new sample exceeds

Moreover, conditioned on a new sample

the probability that it exceeds

Note that the above calculation exploits the memoryless property of the exponential distribution, and the fact that

are i.i.d. Thus, when a new sample exceeds

(and thus sets a new record) with probability 1/2. Therefore,

is an i.i.d. sequence of random variables with the same distribution as

is a geometric random variable independent of

with success probability 1/2. Finally, since

is assumed to be regularly varying (and therefore subexponential, which I’ve talked about in an earlier post), we have

which proves our desired induction step.

2 thoughts on “Heavy-tails and world records”

Rigor + Relevance is an academic blog for the Rigorous Systems Research Group (RSRG, pronounced "resurge") at Caltech. It covers a variety of topics, from networks to energy to markets to privacy, with a slant that comes from the goal of having practical impact via a focus on mathematical foundations.

The blog is edited by Adam Wierman and also includes contributions from Mani Chandy, John Doyle, Katrina Ligett, and Steven Low; as well as other faculty, postdocs, and students in the RSRG group at Caltech.